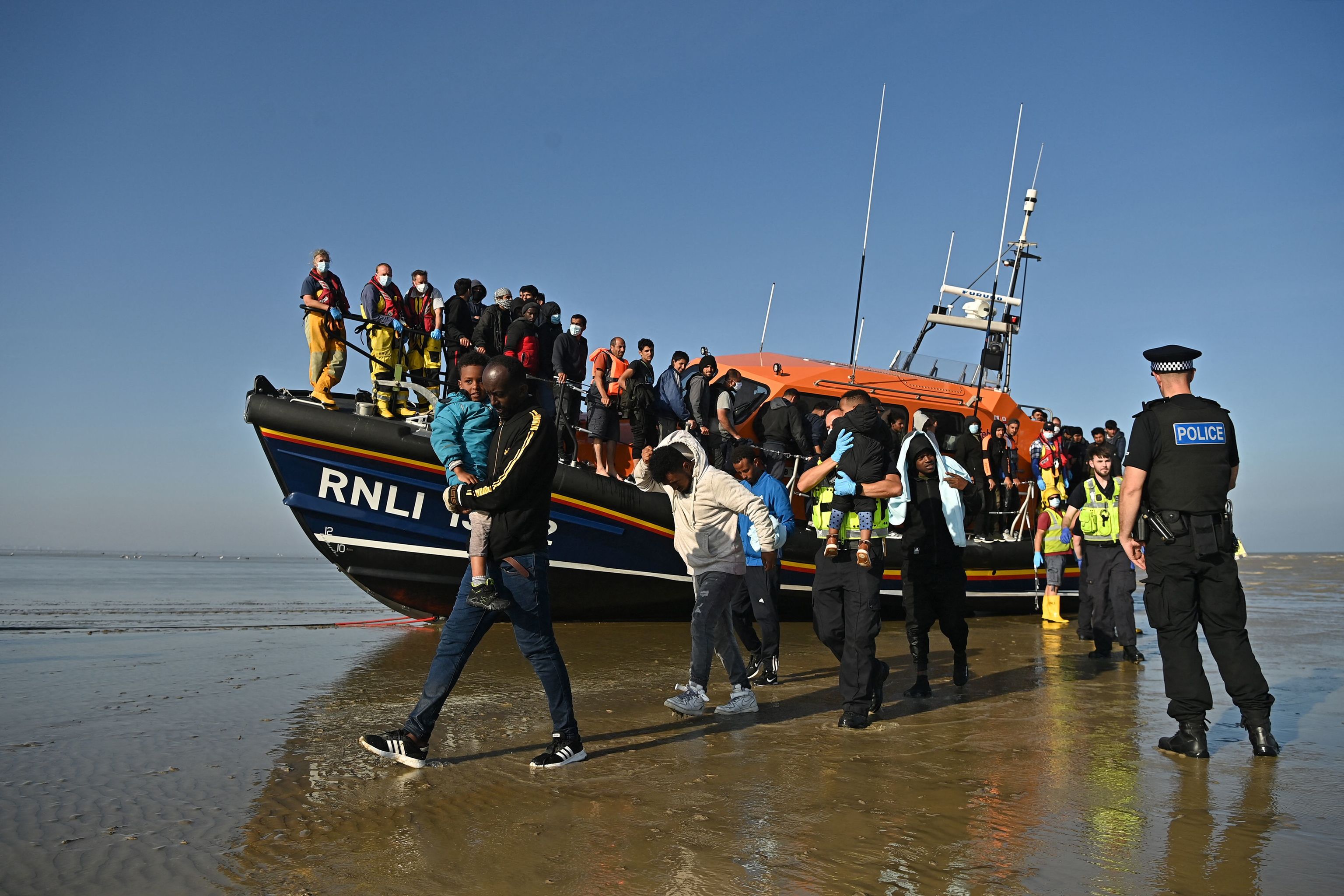 European countries are the focus of flows of people coming from different countries in search of a better quality of life. However, irregular migration has increased in 2022 on almost all routes, except for the Western Mediterranean. In response, France has begun diplomatic efforts with Italy and the UK to find solutions.

READ MORE: ‘CHANGES IN THE SPANISH MIGRATION LAW THAT YOU NEED TO KNOW’

On the other hand, the UK has received 40,000 people entering across the Channel from France so far this year. This is more than the 28,561 people registered last year. Most of them are Albanians, Iranians and Afghans.

FRANCE AND UK TOGETHER TO PROTECT THE CANAL

To deal with the situation, the UK has pledged 72.2 million euros, while France will increase its troop presence in the north of the country by 40 per cent, equivalent to an additional 100 officers. Both countries will also have observers on both sides of the channel.

This agreement comes after Rishi Sunak took over as prime minister, which shows an improvement in relations. However, the UK says there is “no miracle solution” to curb irregular migration, UK Home Secretary Suella Braverman said in a statement. 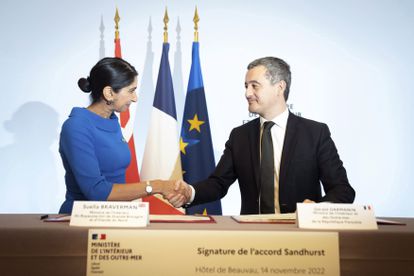 Meanwhile, during the week of 6 November, tensions between France and Italy escalated after the latter refused to give access to a humanitarian rescue ship with 234 migrants on board, forcing France to accept it. This prompted France to suspend an EU solidarity pact, under which it was to relocate 3,000 migrants relocated from Italy.

A CALL TO CALM TENSIONS

After the incident, presidents Sergio Mattarella and Emmanuel Macron held a telephone conversation in which they agreed on a policy of “full cooperation”, both bilaterally and within the EU, to deal with migration, and other issues.
However, Mattarella has no real power in day-to-day government in Italy, but Prime Minister Giorgia Meloni, who heads the new far-right leadership.

It will be difficult to see a change of strategy on Italy’s part, as one of Meloni’s promises was that the country would no longer be the main port of entry for migrants travelling across the Mediterranean.

So far this year, according to Frontex, a total of almost 43,000 people have landed in Italy and Malta. However, the burden is on the former, as Malta has registered the entry of only 30 people, compared to 300 at the same time last year. Most of the boats with migrants come from Libya and Tunisia, although the majority nationalities are Egyptians and Bangladeshis, according to the report. I. FOCUS ON OUR MOST POWERFUL (& POSITIVE!)

CCN and the other ASAP! Coalition members are fortunate because we have the most convincing and positive reasons for stopping mass immigration.

All members of the ASAP! Coalition advocate U.S. population stabilization. We know how many benefits would be achieved by stabilization. We can talk truthfully about the benefits of population stabilization, including environmental protection, budget relief, reduction of ethnic tensions, reduced costs for schools, hospitals, and other infrastructure, and, not the least, providing the necessary conditions for the long-term sustainability of the U.S.A. at a reasonable standard of living and quality of life.

Any organization which does not advocate, as a first priority, a moratorium on all legal immigration in excess of 100,000 per year is just kidding around, much to the detriment of those who are sincere. That organization is not really serious about achieving U.S. population stabilization.

Failure to advocate a low, all-inclusive number undercuts our most convincing rationale for a moratorium — that U.S. population stabilization is a necessary, absolutely essential step toward protecting the environment for the long term and achieving a sustainable economy to secure our children’s future.

The most ineffective and counterproductive positions in the immigration reform movement are those which would not lead to stabilization or which undercut those positions that do. Some national immigration “reform” organizations fail to advocate positions which would achieve their ostensible goals. It is thus not surprising that the immigration reduction movement has not had any significant victories for over two decades. Indeed, one national organization does not push any particular numerical limit at all! This undercuts other organizations that try to give activists, and members of Congress, a “rallying point” number that incorporates a rationale for lower numbers.

III. ORGANIZATIONS SHOULD NOT TAKE POSITIONS

WHICH UNDERCUT OUR SUPPORTERS IN CONGRESS

An elementary principle of successfully lobbying for immigration reduction is that organizations should not take positions on immigration levels which are higher than the numbers which are contained in the bills sponsored by our allies in Congress who support reductions.

If “reform” organizations do take such “higher” positions, they not only undercut the efforts of our Congressional allies, but also eliminate all leverage we would gain by advocating numbers lower than our Congressional supporters’. Incredibly, one national organization is pushing such a higher position.>

Late last Summer, one national organization recommended in a fundraising letter that we “build a coalition of members of Congress to at least begin considering the recommendations for legal immigration reduction made by Barbara Jordan’s national bi-partisan commission.”

Indeed, while the Commission in general and the heroic Barbara Jordan in particular did admirable work, the political document produced after her death, and the numbers of legal immigrants recommended — about 700,000 per year — even if enacted, are not nearly low enough to ever allow U.S. population to stabilize. From a political perspective, starting with such a relatively high number provides no environmental carrying capacity rationale and no political leverage whatsoever for lower numbers.

Focusing on the Jordan Commission’s recommendations in general would direct attention away from our side’s rationale for much lower numbers: protection of future generations, the economy, and the environment that sustain them.

It should be noted that there were some good recommendations in the Jordan Report — that the INS be split into an “enforcement” division and a “service division,” for example. But unqualified advocacy of the Jordan Commission’s recommendations is counterproductive.

The currently pending HR 2712 would explicitly “enact a moratorium” on most categories of immigration, and limit the rest. But two national organizations refuse to explicitly push the moratorium that HR 2712 would enact, although one half heartedly says it supports the bill. How can reductionists ever achieve significant reductions unless they communicate the message that the U.S.A. is “full” and we need no more mass immigration. And how can we support those members of Congress who sponsor the “moratorium” explicit in HR 2712 unless we explicitly push a moratorium.

Regardless of how many “professional lobbyists” a “reform” organization has on The Hill, hamstringing them by not allowing them to explicitly push a moratorium negates their effectiveness in obtaining reductions.

That national organization advocating trying to create a coalition of members of Congress to re-examine the Jordan Commission’s recommendations may not be aware that those Jordan recommendations were discussed by Congress and the Clinton Administration prior to the 1996 bill. Those recommendations incorporated the principle of incremental reductions, and reductions in some categories.

But those immigration “reform” organizations’ path of starting high (as, e.g., with the Jordan Commission’s recommendations) with the hope of achieving incremental reductions or reductions in some categories is a failed path, as has been demonstrated repeatedly for over 20 years. Indeed, one organization pushed a bill which capped the numbers at 780,000 in 1996 — predictably, we got no reductions.

Advocates for reducing immigration who truly want to be effective need to argue for the most persuasive rationale: 100,000 legal immigrants a year for five years followed by 200,000 a year (and a moratorium on all categories above those), because these are the highest numbers that would ever allow the United States’ population to eventually stabilize. Pushing a position which incorporates the failed strategy of 1996 and earlier years undercuts those organizations and the members of Congress who are pushing positions which can succeed, if all organizations get behind them.

IV. HOW TO GET SIGNIFICANT REDUCTION, AND HOW NOT TO

Advocating “reforms” or reductions only in certain categories of immigrants without advocating an all-inclusive moratorium is ineffective, because it implicitly grants the opposition’s basic premise: that some substantial level of mass immigration is good. Only the word and concept “moratorium” communicates the message: The U.S.A. is full, we want no more mass immigration.
The opposition must be asked to justify any substantial level of immigration. Advocating a moratorium as our “default position” forces the opposition to justify exceptions to this position. And, while they may be able to justify some immigration (of some law-abiding spouses and minor children of U.S. citizens, for example), they certainly cannot justify mass immigration that drives explosive U.S. population growth with all its negative consequences for national security, the environment, and the economy.

Only if we explicitly advocate an all-inclusive moratorium do we force the opposition to engage in such a basic examination and attempted justification of mass immigration. The only bill in Congress which would result in a substantial reduction in overall numbers is HR 2712 — an all-inclusive explicit “Moratorium” Bill. It is, thus, counterproductive to support any other bill or any position with higher numbers.

Since bills increasing mass immigration may pop up under as-yet-unknown euphemisms, the only way to effectively anticipate and oppose such bills is to advocate an all-encompassing moratorium and only a moratorium. That not only puts pressure on any and all immigration-increasing bills, but also generates pressure for lower numbers at the same time! No other position has all these positives…. A Moratorium Bill anticipates and foils circumvention.

The immigration “reform” movement’s unblemished record of legislative losses over the past two decades can be traced in large part to pushing for reductions using the “category approach.” Merely opposing a specific increase in any particular category, e.g., H-1B visas, asylees, or extended family members, is almost always a strategic, tactical, political, and public relations mistake. Such use of a “category approach” implicitly sends the counterproductive message that the current phenomenon of mass immigration (of over one million legal immigrants per year) is more or less acceptable, because reduction of only a few categories is advocated.

This “category approach” to “reform” plays into the hands of the opposition — the proponents of mass immigration. Trying to reduce individual categories results in the ultimate numbers being the outcome of horse trading, pressure tactics, and intense lobbying by wealthy special interests — areas in which our opposition is skilled, powerful, and well financed.

If the immigration “reform” organization you support fails to explicitly push a moratorium as the first priority, ask them how they can effectively oppose all the different bills (including those with deceptive titles like “regularization,” which would increase immigration) without explicitly supporting an all-inclusive moratorium. And ask them how they expect realistically to achieve any reductions (in light of 20 years of failure to do so) without advocating an all-inclusive moratorium.

Why should any of us support policies which do not work??